Backend Engineer Sean attended RailsConf in the USA. He's shared a few of the standout themes: Community and Leveling Up.

I was lucky enough to have booked a vacation to the United States which coincided with RailsConf 2017 in Phoenix, Arizona. At PaperKite we try to send our team to the major conferences, such as WWDC and Google I/O for our mobile developers. In the backend team at PaperKite we often use Ruby on Rails to build mobile APIs, so the opportunity to attend RailsConf was one I did not want to pass up.

RailsConf had a great lineup of speakers this year who delivered some fascinating talks around all sorts of topics including code organization, team leadership, diversity, a wide range of tech including Elm, Elixir and React, and of course Ruby on Rails.

The conference is organised into tracks across five different rooms allowing you to mix and match your day however you wish. There was something for everyone and although it can be overwhelming at first, the format works really well.

In this post I’m going to touch on a few of the standout themes at RailsConf this year: Community and Leveling Up.

David Heinemeier Hansson started off the conference with an exceptional keynote that set one of the overarching themes for the conference – Community.

DHH touched on the fear, uncertainty, doubt (FUD) that can often be felt by developers when weighing up all the new technologies coming out. As DHH has explained it’s not usually technical benchmarks that make a technology successful, but a combination of the values the framework stands for (Rails Doctrine) and the community that surrounds it.

It’s a well-known fact that the Ruby on Rails community is phenomenal, and as DHH explained this is one of the key reasons why Ruby on Rails has lasted the test of time (12 years and counting) and is still one of the top choices when building anything for the web.

There were a tonne of talks to watch to level up your work. My pick of the bunch was a talk by Brad Urani (Procore) on “The Arcane Art of Error Handling”. He presented some smart approaches for dealing with errors in Rails and making them more meaningful to both your end-users and your developers. Doing things like adding severity to your error classes, and creating a custom error hierarchy early on can aide in development, improve user experience and make error reporting richer so it’s easier to track down bugs.

‘Rails APIs: The Next Generation’ was another great talk by Derek Carter (Procore). Derek explained the process Procore went through when building their API for the Procore product. He touched on techniques such as creating a style guide, creating examples in documentation and providing a contract to future consumers of the API. All were all good reminders of good practices to follow.

Among the other content were talks on security, leadership, alternative technologies such as Elixir and supporting technologies such as React Native, which potentially lets you have a single code base for your backend and mobile applications. At PaperKite we’re always looking to improve our tech stack so adding technology like React Native and Elixir to our toolbox is exciting.

See you next year

RailsConf 2017 was fantastic. Not only did it have great talks on Rails and its surrounding technologies but it offered thought provoking talks including an amazing keynote by Marco Rogers on being black in tech which earned a standing ovation from the audience.

Besides the talks and presentations it was a great place to meet people from the Rails community from all over the world.

RailsConf really is a gathering of Ruby and Rails devs from across the world and we hope to visit again in Pittsburgh next year! 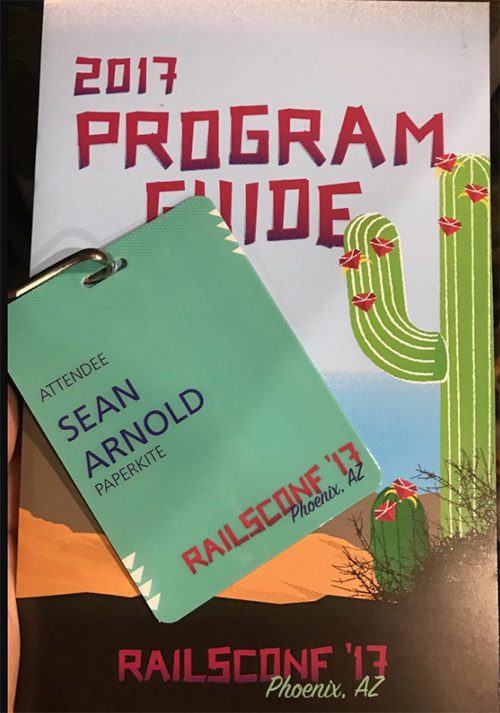